You are here: Home / Promotion / Going to Audible

It took us some time to come to Audible. I say us because I rely on my friend and publisher as well as Mr. Scott to help me with this type of decision. I like to write—I don’t much care about the business end of crap. When we looked at doing audio books several years ago, the upfront costs, back end royalties, and some questions about book rights and long term exclusivity left us with too many questions. Since then, Audible and Amazon have made enough changes on the business end that audio is now doable. 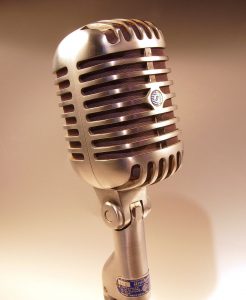 Once that decision was made, I needed to find a narrator. I considered reading them myself, but I’d rather write and watch football than commit to the hours needed to accomplish the task. Most of the women narrators that I sampled just didn’t do it for me, so I went with a male and chose D.C. Newman as the narrator. I liked his tone and balance.

There is nothing stranger than to hear your character speak in a voice that is different than the one that you have heard in your head for the last seven years. I wrote the first draft of Saving Emily in November 2011 during National Novel Writing Month. After much work and editing, the book was finally published 4 September 2012. Saving Emily is without a doubt one of my favorite stories.

The truth is that people move into my head and camp there while they share they lives. They show up out of the blue and they depart the same way. Sometimes their story pours out quickly as Janice Bracken’s did, and sometime they have to be coaxed along and it may take a year to get to the end. However long it takes, they share their story in their voice.

Saving Emily was the first book that I assigned an actual voice and personality to. I’ve said before that I always felt Janice Bracken to be a lot like the character played by Rene Russo in Lethal Weapon 3 and 4. So for the last seven years, I’ve heard Rene Russo’s classy, sultry voice in my head telling her part of the story.

As good as D.C. Newman is and as much as I like his work, he sounds nothing like Rene Russo, so when he spoke her words, it was jarring. Not surprising, I wasn’t the least bit bothered to hear him speaking Mac’s words, even though I’d been hearing Gary Sinese in my head all this time. The strangeness stuck with me through the first couple of chapters, but then one day, I just got into the sound of his voice and let it go. For the first time, it was simply about letting another side of the story in.

The process itself is made super simple by D.C. Newman. He does the reading a chapter at a time. When he’s satisfied he has it right, he loads the chapter through the service, and sends me a message. I open the book and the audio file, reading and listening at the same time. I make sure that he’s read it correctly and that it sounds the way I want it to sound. If there’s something not right, I note the location on a sheet and send it back. He’ll make corrections and move on. Working with him has been incredibly smooth and easy. The completed project goes up on audible and it’s on to the next.

He’s recently started work on Blood Link and the first two chapters are in the can. He’s a busy guy who’s doing the narration on several books at a time and he has a waiting list of authors, but he’s got me scheduled so we’ll just keep moving forward.

If you’d like to hear a sample of Saving Emily, just hit the link below.