You are here: Home / Library / Blood Link V – The Healer 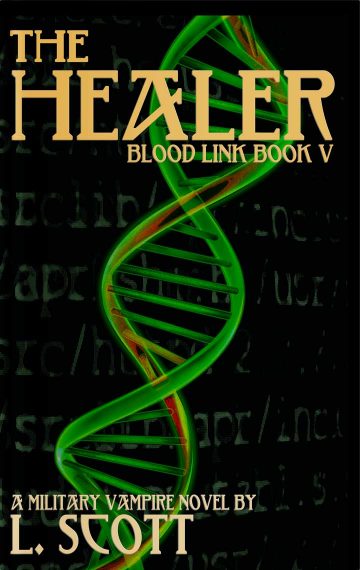 Dr. Peter MacKenzie is weary. Twenty-four hours after the attack on the unit that has left several of his friends severely wounded, Mac has a full plate. What Mac doesn’t need right now is someone from the Department of Defense Inspector General’s office showing up because they’ve noticed an anomaly in the blood bank records.

Agent Holly Lind doesn’t want to waste her time going to Camp Revells to deal with a bunch of idiots who can’t spot a simple computer error. Dumped out of her job in cyber security after an argument with her boss, Holly is forced to cool her heels for a year in the IG. But that doesn’t mean that she stopped playing with computers. Working under her hacker alias of “Portunes,” Holly is still testing security and on the lookout for unauthorized infiltrations of the NSA and DOD computer systems.

What Holly doesn’t know is that there’s a hacker out there looking for a way into Camp Revells, and he’s sure she’s that way in. “Invicta” is chasing “Portunes” through cyber space and he now wants Holly almost as much as he wants to destroy the vampires of Camp Revells. What “Invicta” hasn’t counted on is that once Mac meets her, he will want her too.