You are here: Home / Archives for Lori 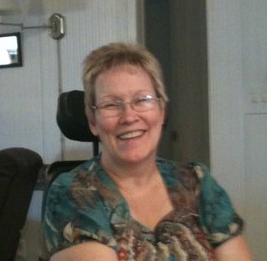 I had heard the distant sound of thunder earlier. I thought at first that it was a low flying helicopter as my windows rattled slightly, but then it definitely took on a different characteristic. I finally realized that it was the sound of thousands of Marines snapping to attention, combined with the applause from the angels as they stopped what they were doing to welcome her. I certainly hope they got the streets reinforced in time.

Ready or not – Lori has arrived!

Saint Peter has apparently accepted Lori’s offerings and opened the gates. I have no doubt that the Marines tried to hide their smiles even as they came smartly to attention. The word has surely spread about a welcome party behind the barracks later in the evening. Of course, it is entirely possible that the sound I heard was actually Saint Peter banging his head against a wall after losing his first argument with Lori.

Some people may think that Lori has lost her battle. They’re wrong.

Lori has won her war.

Her goals were to face her adversary and live each day to the fullest, to be the best wife, mother, grandmother, daughter, and sister she could be, and to always give more than she received. She met those goals. Who wouldn’t wish to have her courage, sense of humor, grace, and dignity?

Lori worked hard to be an active and vibrant participant in life until the very end. Only a few days before her death, we were sparring via text message. Picking on each other and sharing our love. She promised to keep an eye on me and threatened a slap to the head if I veered off course. She also told me that she was looking forward to the idea of slapping me from above since I couldn’t retaliate. Even as she neared her death, she remained my most fierce cheerleader, asking to beta read my next book, and encouraging me to continue writing. She never once missed an opportunity to tell me that she was proud of me.

I am just as proud of her.

As painful as this loss is, I refuse to spend much time weeping. Lori really hated all the crying and hand wringing. She wanted people to enjoy the time they had with her, and she much preferred looking forward instead of examining the past or bemoaning the fate that God had chosen for her.

When I saw Lori in November, she told me that when she died, she would be thrilled if people would have a drink, eat their favorite meal, order dessert, or just have a Rollo in her memory. Her hope was that we would all live, love, and laugh every day, and that each of us would attempt to give more to others than we received. I know that she gave me more than I ever gave her.

I’m absolutely positive that Lori will be accepted as a guardian angel, and that she will do her best to keep me on the right path. In the coming years, I may try to mess up a little just to see if she’s on the job. It’s not like that will be a real stretch for me. The thing is that I’m sure that I’ll feel the need to be close to Lori at times. It might be as simple as the occasional speeding ticket in honor of Lead Foot Lori. Getting a head slap from an angelic friend in the form of a good looking cop would make a small screw up worthwhile.

This isn’t the first time that Lori and I have been separated. But I’m not sure the powers on high really get that we’re like two magnets who will always manage to find our way back to each other. When the time is right, we’ll do so again. Until then, I will carry her laughter, her harassment, her encouragement, and her sweet smile with me. I will also occasionally look up and use my best first sergeant voice when I bellow a reminder to her that those damn Marines have work to do and so does she. Even a guardian angel needs to be kept on her toes.

See ya later, Smiley. I love you.