You are here: Home / Personal Commentary / Buddy, can you spare a phone call!

In 1932, desperate and hungry, about 17,000 World War I veterans converged on Washington D.C. to demand a promised cash bonus be paid early. The World War Adjusted Compensation Act of 1924 had awarded them each a bonus certificate they could redeem in 1945. With interest, the value would be about $1000. But the veterans needed the promised money then, not later. After the 1931 veto of the Patman Veteran’s Bill, most veterans had given up hope of getting their bonus certificates cashed out. 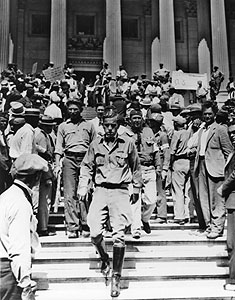 Former Army sergeant Walter W. Waters wasn’t one of them. Waters figured the way to get something done was by lobbying. He also believed that the veterans had to be in the capital to be heard. Waters gathered and led a group of 300 Oregonian veterans to Washington. The group left Oregon on 11 March 1932 and made their way across country by the cheapest way possible – riding the rails, hitchhiking, and walking. Calling themselves the Bonus Expeditionary Force” (BEF) after the American Expeditionary Force they’d been a part of in France, the group arrived in Washington D.C. on 29 May. Thousands more veterans having heard about them on the news were waiting for them. Their numbers swelled to 17,000. 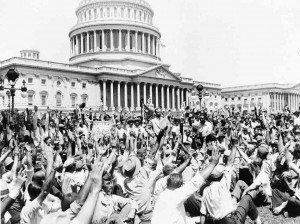 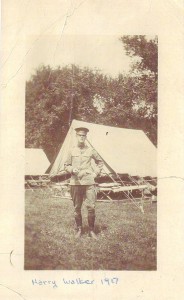 My grandfather, Harry Walker, was one of those 17,000. Out of work and worried about how he was to care for his family, he left his wife and two children in Philadelphia, and made the trip to Washington D.C. in hopes of getting the government to cash the certificates.

Waters called for the men to set up a camp and organized it with the same guidelines the Army utilized. The men listened to him when he informed them that to be a part of the camp they needed to register and provide proof they were veterans, and that there was to be no drinking, gambling, or communist conspiring inside the camp. They were there to demonstrate in an orderly manner that befit their status as former soldiers, sign petitions requesting relief, and to lobby Congress on behalf of themselves and their fellow veterans. They proceeded to do just that. World War I vets were only part of the more than 40,000 people who converged on the capital that summer demanding relief, but the news focused on the Bonus Army and their efforts. 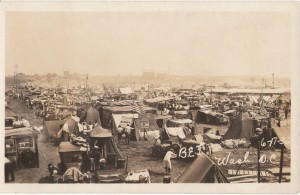 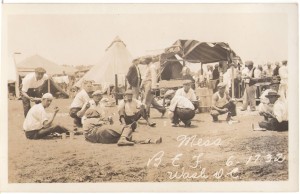 My grandfather told my mother that it was orderly and peaceful for the most part. They just wanted their elected representatives to help them out by giving them what had been promised to them.

On 15 June, the House of Representatives did listen to the veterans and they passed the Wright Patman Bonus Bill that would have allowed the vets to receive their cash bonuses.

However, on 17 June, the Senate flatly rejected that bill. 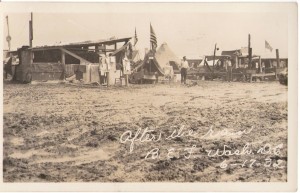 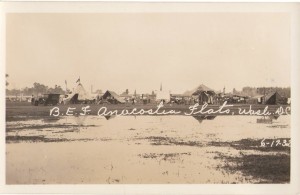 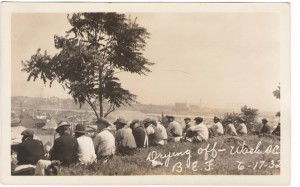 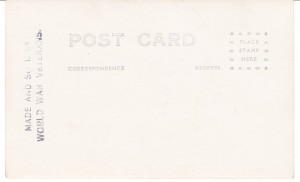 (The above post cards came from my grandmother’s album – notice on the last card that the inked stamp only says World War.) 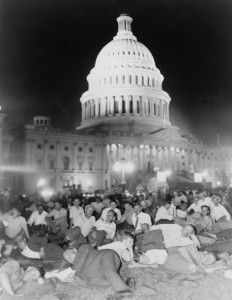 Defeated, a great number of the veterans decamped and returned home. However, several thousand veterans with their families remained in Washington D.C. to continue lobbying Congress. Most of them didn’t leave because they had no homes to go to and no money to travel with. While the Bonus Army continued to conduct itself with decorum, they weren’t the only ones encamped in the Capitol. Many thousand others were still encamped in shantytowns and tents right across from the White House and in front of the capital building.

Supposedly concerned that the large group was a threat to national security, Attorney General William D. Mitchell ordered the Washington police to clear the squatters from the camps and the city. Before that foray was over, two veterans had been killed. 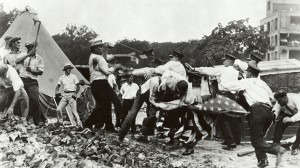 President Herbert Hoover ordered the Army to secure the city. General Douglas MacArthur, using the 12th Infantry Regiment, the 3rd Cavalry Regiment, and 6 battle tanks commanded by Major George Patton, sent his forces to push the squatters and their families out of the capital. 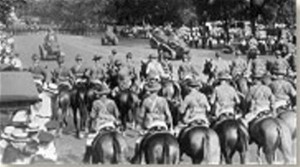 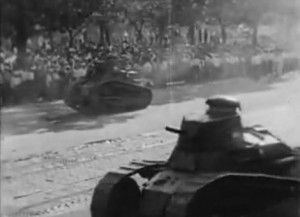 That’s right. General Douglas MacArthur and Major George S. Patten led a cavalry charge against unarmed fellow Americans and their former brothers in arms who had peacefully assembled in our nation’s capital.

The remaining veterans and their families, most of whom had been cheering the appearance of the Army believing they were there to protect them from the police, were forced to flee for their lives across the Anacostia River to the large camp on the Flats. Hoover ordered a halt to the charge; however, MacArthur ignored him and led the infantry with fixed bayonets and tear gas in pursuit of the fleeing masses of men, women and children. 55 veterans were injured, 135 arrested, one veteran’s wife miscarried, and a 12 week old child died after being caught in a tear gas cloud. MacArthur’s men then burned the camp to the ground effectively ending the Bonus Army’s encampment on the Anacostia Flats. 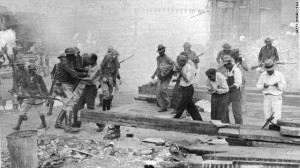 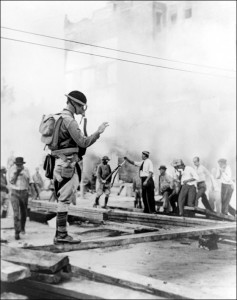 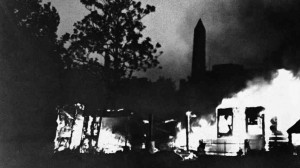 My grandfather called it a despicable act and a gross violation of their First Amendment Right to peaceful assembly. He hated Douglas MacArthur until the day he died.

The nation was also incensed at the treatment of the veterans, but their anger didn’t change the minds of the House or the Senate. However, when the election came around in November, the voters remembered and Herbert Hoover, as well as a good number of other incumbents, was not returned to office. 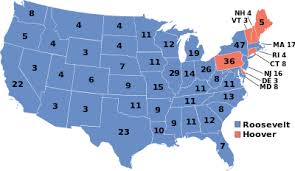 The veteran’s didn’t receive their payment until 1936 when the House and Senate voted to pass the Adjusted Compensation Payment Act successfully overriding President Franklin Roosevelt’s previous veto of the bill. It’s not until Roosevelt signs the Servicemen’s Readjustment Act of 1944 (known as the G.I. Bill) that veteran’s rights are secured.

Or so we thought.

Why tell you this story? Because just this week, our elected representatives decided that the retired veterans of this country don’t need to be treated with the respect they’ve earned.

“Annual adjustment of retired pay and retainer pay amounts for retired members of the Armed Forces under age 62:
This provision modifies the annual cost-of-living adjustment for working-age military retirees by making the adjustments equal to inflation minus one percent. This change would be gradually phased in, with no change for the current year, a 0.25 percent decrease in December 2014, and a 0.5 percent decrease in December 2015. This would not affect service members who retired because of disability or injury. Service members would never see a reduction in benefits from one year to the next.”

Really? So a future 1.3% COLA for all federal retirees will only a 0.3% COLA for veterans – just the military retirees. Once again, all federal pigs aren’t equal in the eyes of the federal government.

Now keep in mind that for those of us who stuck around for all those years so we could retire – we were always promised that we’d have medical and dental for the rest of our lives. Yes, we were told that. Yes, we all believed it. No, we didn’t get it in writing. Yes, we were stupid!

But would it have mattered if we did get it in writing? Perhaps we should ask the Native Americans what a written promise by our government is worth.

The base hospitals are closing and becoming clinics with reduced medical staffs so they no longer treat retirees. Retirees are now forced to pay for TRICARE. Yes, I’m aware that it’s vastly cheaper than most civilian insurances, but that’s not the point – it’s not what we were told that we could expect if we stayed when everyone else left for decent paying jobs. There is no dental care – we’re forced to pay for a dental plan just like everyone else. Now the Department of Defense is talking about closing the base commissary system (the grocery store). I’m not sure how the young families will survive if they do that, much less the retirees who live near those installations and depend on them.

Silly us, we believed that our government would respect the people who enforced all those treaties and policies, furthered our national interests, and of course protected our national security. Remember us? We’re the ones who worked for less than we were worth because we believed in the greater good of our nation. We’re the ones who got spit on and derided for doing what our nation asked us to do. We’re the cold war warriors who can’t even get the same disability considerations because we sat in silos instead of serving in a sandbox. We’re the men and women who worked weekends, holidays, and anytime we were told to because that was the commitment. Silly us, we believed that our government would honor its word to us with the same honesty and dedication that we honored our commitment to the nation. Funny how their service is so much more important and worthy than those of us who ensure their place in the system.

Well, don’t we all feel as appreciated as a used freaking piece of toilet paper now?

What can be done?

#1. If every veteran took just five minutes out of their day to contact their elected representatives to express their discontent (don’t worry, they won’t call you back) then we could clog the phone lines and annoy the snot out of them. Phone, email, write a letter, or show up at their damn office!

#2. If everyone non-veteran who’s claimed to appreciate and love us veterans joined in, then perhaps our government just might pay attention.

#3. Share the news of what’s being done. Most people have no idea. They’re just excited that someone’s trying to pass a budget. This one needs to fail in the Senate or be vetoed by the president.

Finally. As elections roll around – we can vote every one of those useless SOBs out. They’ll still have their juicy retirement, but we’ll feel better for doing it.

As for who would be willing to go to Washington? I’d go! My grandfather went – can I do anything less than he was willing to do? How about if we all go. There’s enough of us to cause one hell of a traffic jam and become an annoyance to their lives.

At least until they send in someone to run us the hell out of town. And would they? You bet your ass they would!

Sadly, I doubt there would be anyone in the hallowed halls of our capital building to listen. Have you noticed the timing? Pass something and then go home on Christmas break. And, even if they were there, would any of them give a damn that we showed up. Our elected representatives’ heads are simply too far up their collective asses to listen to anyone but a guy who can tap them on their butt with money in his hands.

I’ve got no money to be tapping with and I’ll sure as hell have less now.

For help in contacting your elected representatives by email visit http://capwiz.com/moaa/issues/alert/?alertid=63028561&PROCESS=Take+Action
It only takes a minute to fill out the form and send it. Thanks for your help.

All the sepia tone photos are mine. All other photos were blatantly stolen from the Internet in a gross violation of someone’s copyright. Please feel free to have me arrested and sent to federal prison where I can get 3 hots and a cot along with some much needed dental care that I can’t afford on my retirement.